Happy October! Doborog has been heads down hard at work on the epic final Story Mode chapter—see update on timing of that below—but we’re taking a pit-stop to put out an update of some improvements we wanted to get out ASAP!

In response to feedback, we’ve decided to refresh the Spear and Shield mechanics! Many didn’t like combat with the spear—to the point it was banned from fan tournaments due to flicking. We hope this update helps these weapons become a fun part of competitive play once again.

Like with the other languages, we would love to hear your feedback to improve the quality of the translations. Let us know if something doesn’t feel quite qilsnib enough.

Better Crosshair for Spear and Bow

The crosshair on the bow and spear could previously be hard to see depending on the situation. The bow and spear now have a new crosshair that’s bigger and inverts the colors behind it for maximum contrast. Let us know how it feels!

Arrow rotation now snaps instantly between vertical and horizontal mode, giving you unprecedented tactical control for how you deal damage. Hotshot Arrow-Shooting Tip: Spidertrons mainly bob up and down.

Has THIS ever happened to YOU: 3 decorative voxels get taken off the beautiful horn attachment of your robot head, and you fall down on the ground, dead as the day you were harvested?

Now head damage is only fatal if it damages the important cubes sitting near where your central processing unit resides (a 2×2 cube 3 voxels above the neck).

In Twitch Mode bow1s now walk towards you if they’re the last type of enemy in the level, which should cause fewer issues with them landing on pillars and taunting your inability to destroy them.

It used to be possible to acquire armor in LBS, leave and re-join the match, and continue to have that armor for zero upgrade points. No longer!

We are still hard at work on Chapter 5, and we’re now aiming to release it early next year.

Why the delay? A few reasons combined made it a choice we hope you can appreciate:

As always, for those of you who live on the bleeding edge, you can follow our development live on Twitch, and even try out the current (very buggy!) build in the experimental branch. While we know how it can be disappointing to have release dates slip, we hope you all can appreciate where we’re landing!

Thank you all for being amazing OG Clone Drone community members! We are so glad to have those of you who have stuck with us throughout the long development process with us during launch and beyond. 💙 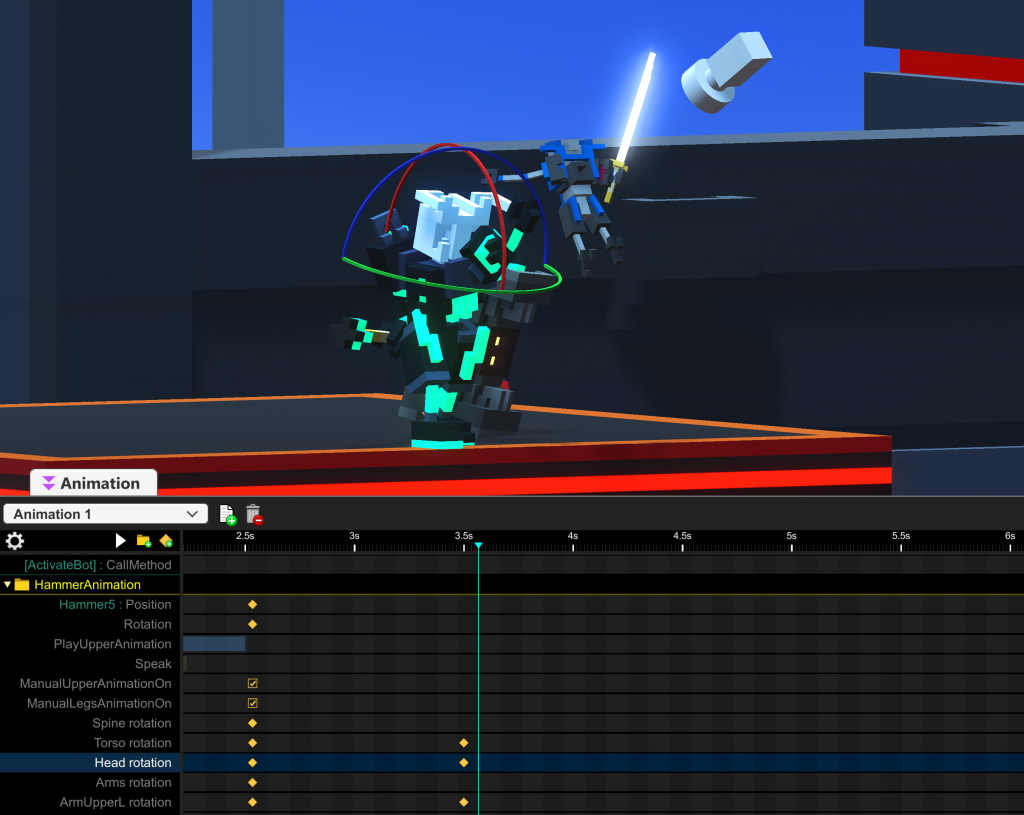 In progress: The epic conclusion to story mode!

Chapter 5 will bring us to the final showdown of the Clone Drone storyline.

We’ve been working hard on laying down the foundations, exploring new game mechanics and expanding our level editor technology to raise the quality of our content even higher.

One of the key questions we asked ourselves at the end of Chapter 4, was how to proceed from its cliffhanger of an ending. We could move the plot along using cutscenes, but I’m happy to announce that instead you’ll be able to have full control of your new battlecruiser in glorious 3D space combat!!!

With the release of the final chapter of the story mode we’re also going to be launching the game out of Early Access!

We’ll likely put out an update or two after launch, but after four awesome years of development we’re starting to look ahead towards what other cool games we can build. We hope you’ll join us on that journey when the time comes! 🙂

We’re super excited to tell you that Clone Drone will be coming to Xbox One, Playstation 4 and Nintendo Switch!

While the main team finishes up Chapter 5, the talented people at The Knights of Unity are hard at work making sure the game integrates smoothly with all the major consoles.

We’re aiming to launch both Chapter 5 and the console releases in in one glorious update sometime around October.

Note: This date is not confirmed and might change, but that’s what we’re aiming for right now.

The experimental branch has a preview of space combat here:
http://clonedroneinthedangerzone.com/experimental
We’d love to know what you think of it so far. 🙂

As always, you can follow the progress of Chapter 5 live on Twitch right here: https://www.twitch.tv/doborog

Let us know if you have any questions! <3

Have you ever observed other players spinning around crazily and somehow killing people?
We have, and it’s not much fun to be on the other side of.

The new update introduces restrictions on how far you can turn while swinging your weapon.
Our goal has been to maintain a good range of motion, so you can still rotate towards your target and strike with great precision, but discourage flailing around wildly around in an attempt to make the hitbox make accidental contact with your opponent.

All weapons have this new restriction, but the one where it was used the most was probably the spear.

To illustrate what we’re talking about, here is a demonstration of flicking the spear around:

And here is the fix:

The camera still moves to not interrupt your flow of motion.

The spear is of course not the only weapon this applies to. Hammer + Sword can no longer spin around wildly either.

A final note: We don’t resent anyone who may have flicked their spear around or rotated their hammer wildly in the past. If the game allows you to do it, it is a legitimate way to play! It is our hope that these changes make for a more predictable and fun multiplayer experience for everyone. Let us know what you think! 🙂

Moving Floor
The risk/reward of getting upgrades is turned TO THE MAX in this level where the floor goes away when you stand on it.

The Facility
Jump around these pretty walkways. 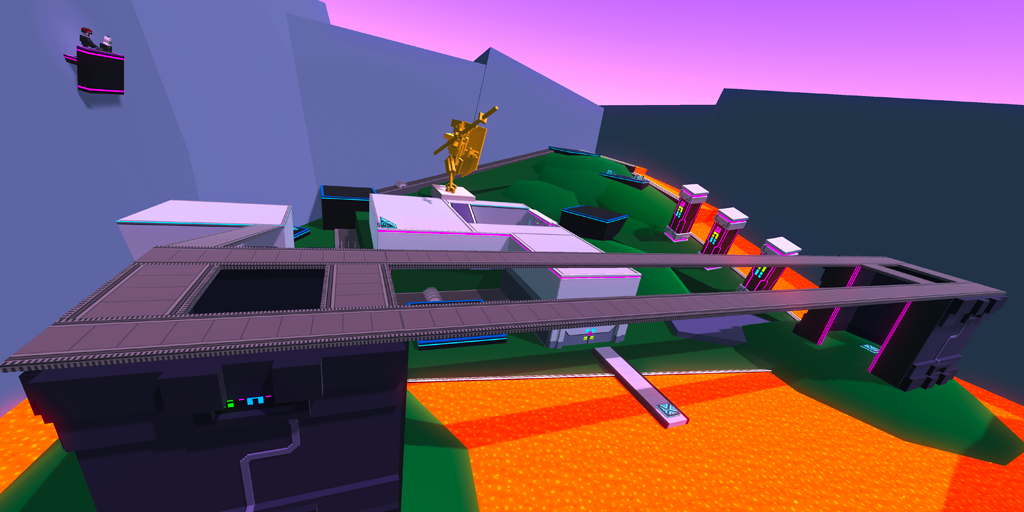 Death Cubes
What is better than a Death Cube? ALL THE DEATH CUBES! 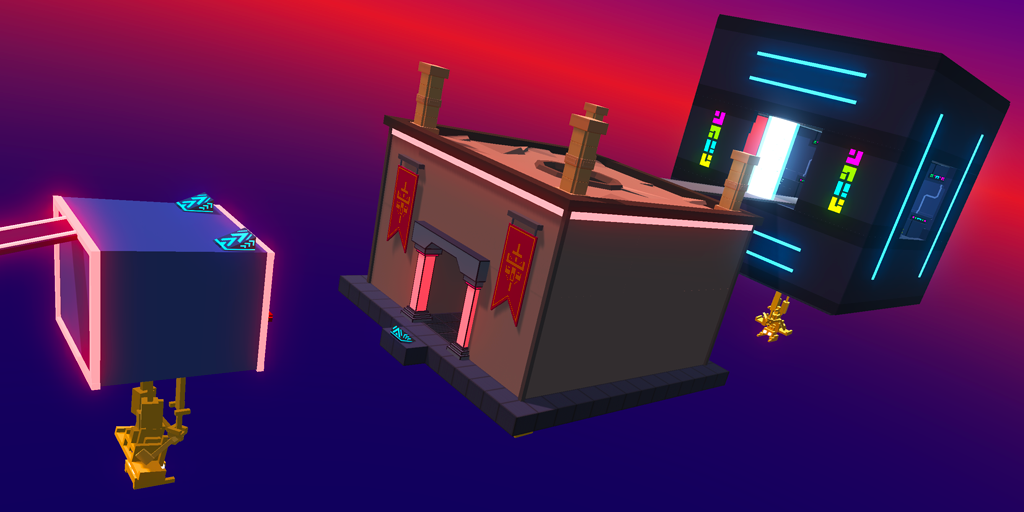 Cliffside
Vast height differences and moving platforms makes for an interesting time among the cliffs. 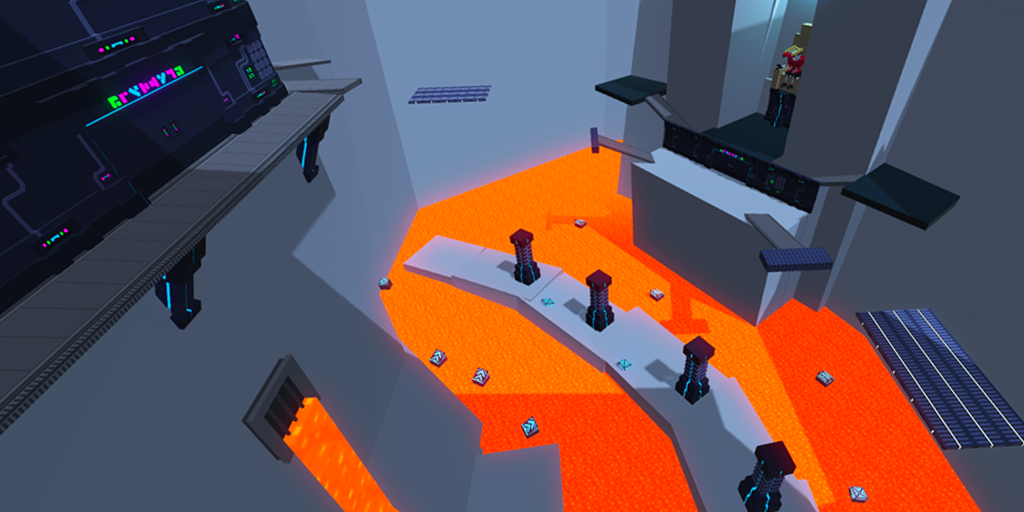 Crashed Waiting Room
Do you like playing in the Waiting Room? Now you don’t have to leave it! 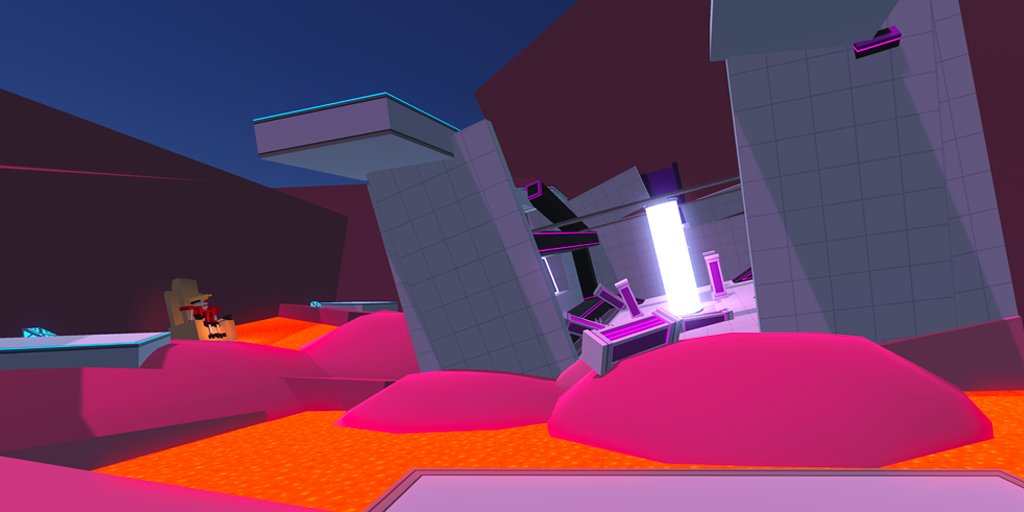 You can now push garbage around.
Help the garbage bots keep the arena clean! 🚮🚮🚮

We’ve also fixed a multitude of bugs, including:

We’ll be ramping up development for the final story chapter in the coming weeks.
This is going to be an epic chapter, so expect a release date many months from now.

More info when we have it! 🙂

Do you like to consume content in a rich variety of human language?? Now it is possible! 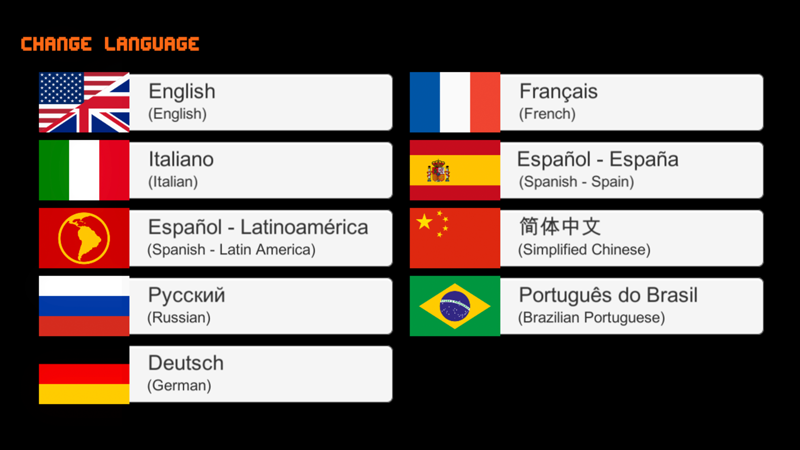 For most of them we have translated all of the UI and added subtitles. For French and German we have also installed voice translators in all the robots!

To celebrate our new communication capabilities we made a brand new gameplay trailer!

Let us know if we missed your language or if you have feedback on the translations! <3 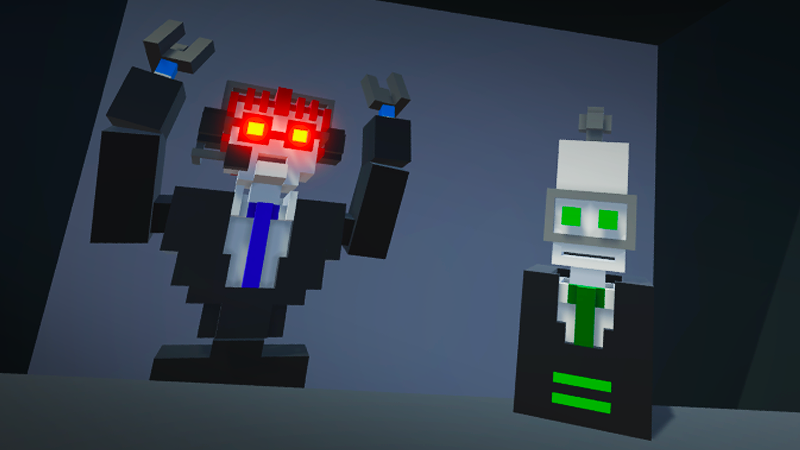 It has come to our attention that humans speak more than one language!?

To help you understand the fine nuances of how your robot body will disintegrate in the arena, we have decided to translate our communications.

And we want your feedback!

So far we have translated:

Since we normally only speak in binary, we need some human opinions on whether things sound right!

You can try the translated version of the game by enabling the experimental branch:
http://clonedroneinthedangerzone.com/experimental

If you see something odd, please deliver your feedback using this handy form:
https://forms.gle/NPz1jVuBh5kKwW5H7

To start with we’re going to translate everything into the following languages:

Did we miss your favorite language? Let us know.

Once we’ve gathered some initial feedback, we’ll move ahead with translating the large amount of excellent commentary in the game. For most languages the game will only support subtitles for the spoken words.

Until then, please try Chapter 1 in your human language and use the feedback form to let us know of any issues! 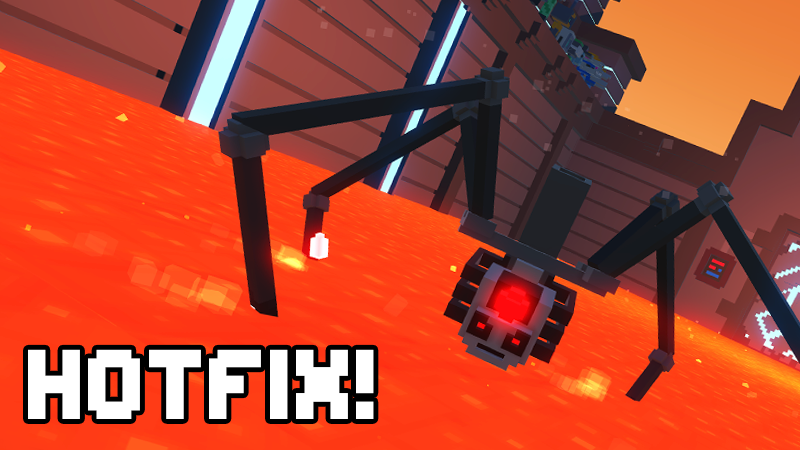 A new build is now live that fixes a variety of bugs!

Achievement progress is no longer counted on Workshop maps.
We saw some levels pop up that pretty much gave you achievements for doing nothing, which goes against the spirit of Achieving things.

Thanks to everyone for reporting bugs. 🙂
If you encounter a bug or a crash, emailing [email protected] is a great way to let us know about it.

What are you doing on Tuesday, human?

We’re launching the next big update to the game, adding Emotes, Achievements, Co-op Challenges and more!

Dance like a robot, flap your arms like a bird or enquire about the location of water like a human, the moment is fast approaching when all these things will be possible!

Are you having a good consciousness cycle? Drinking enough water? We have news!

Soon you will be able to communicate with other humans, via the brand new Emote System.
Perform provocative dances, exchange greetings, or inquire about the location of water – We have got you covered!

In addition to giving you normal Steam Achievements, the new achievements will also play a big role in unlocking Emotes. We were originally going to build this at a later date, but the synergy with Emotes was too hard to resist! 🙂

Do you find the Challenges of the game… challenging? Bring your friends!
In addition to the original single player challenges we’re adding some brand new co-op exclusive ones.

Another big focus for this update is responding to your feedback on co-op:

When is all this coming?? Soon!™

In the meantime, you can always go poke Erik LIVE to see what’s in progress, and let us know your best ideas for new Achievements!

Face the Danger Zone with your friends (or strange humans you find on the internet)!
Co-op lets you experience the joy of Team Work in Endless Mode.

The higher end of Endless Mode just got a lot more difficult.
Behold the terror of the terrifying Laser Raptor and Mark 5 robots in the Uranium and Insanium difficulties! 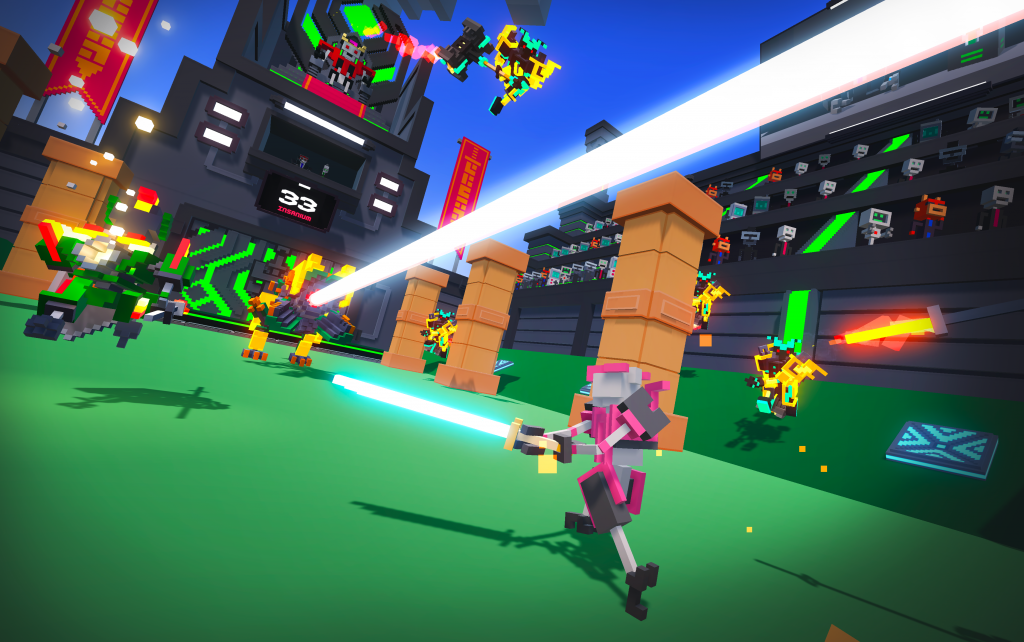 Every single arena level has been revamped to match the beautiful new Arena!
Want to see what I’m talking about? The new Title Screen has a thing for that:

We’ve got a new version of the Twitch Extension out, with a lot of neat additions. Let us know what you think! 🙂

This was a big update, but we have a few more things we want to do before moving on from co-op:

Expect another co-op centric update in the next few weeks!