A new version is now available!
This one is minor, but fixes a few issues that slipped into the Endless Mode build.

Endless Mode gets really difficult! This is by design, but there were some levels we noticed were a lot harder than was appropriate for their Tier.

We looked at some win/loss data and took a pass at tuning these levels down a bit: 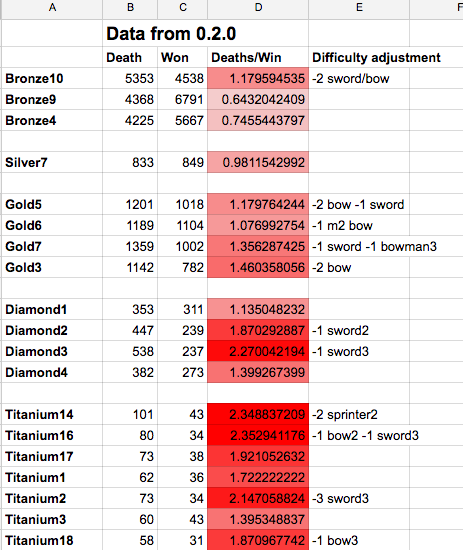 An insidious bug snuck itself into the build. The little mark 1 archers would suddenly refuse to fire until they had the player squarely in their sights. This led to a lot of situations where they would kill you at point blank range.

This change has been reverted, and should make the early levels a little less daunting.

The always hilarious Albert Lai has been helping out with voicing the commentators.

You can look forward to snappy new lines in the following areas:

The humans in the forum wanted THEIR name to be included in the game. Now they have a 0.1% chance of hearing it!

Jonathan has gotten warm in his shoes as a QA tester, which means we know of more bugs than ever before!
Over the last week I tried to tackle as many of the serious ones as possible.

Here are the most interesting ones fixed:

There are a few ways to get the update:

Next week work starts on the next update which is set to launch at the end of November!
More info on that later. 🙂