How do you make a great Last Bot Standing level?
There are many ways, but this guide contains some of the principles we observed when making the official levels that have a big impact on the result. 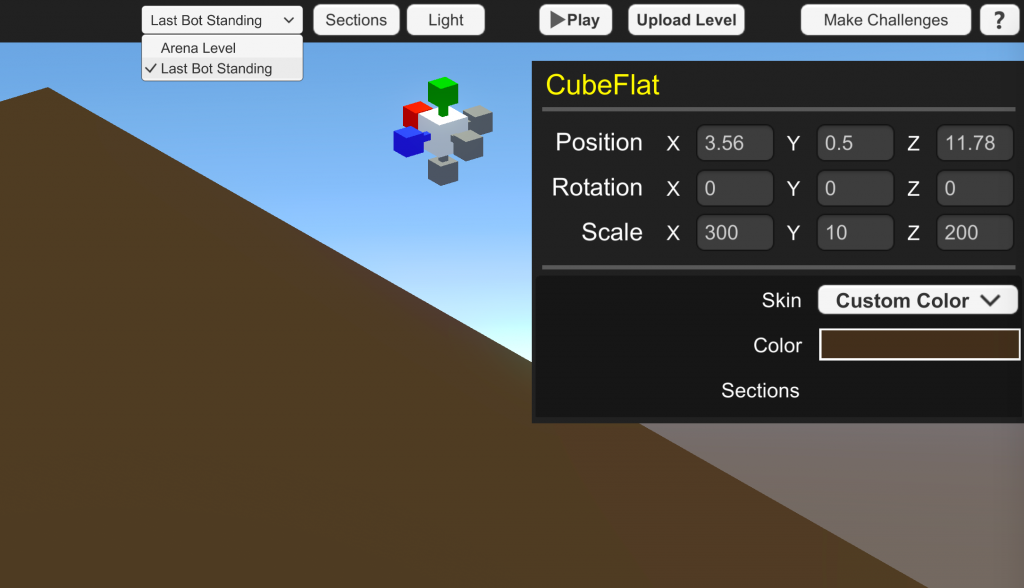 For the map to work as a Last Bot Standing level it needs the following things: 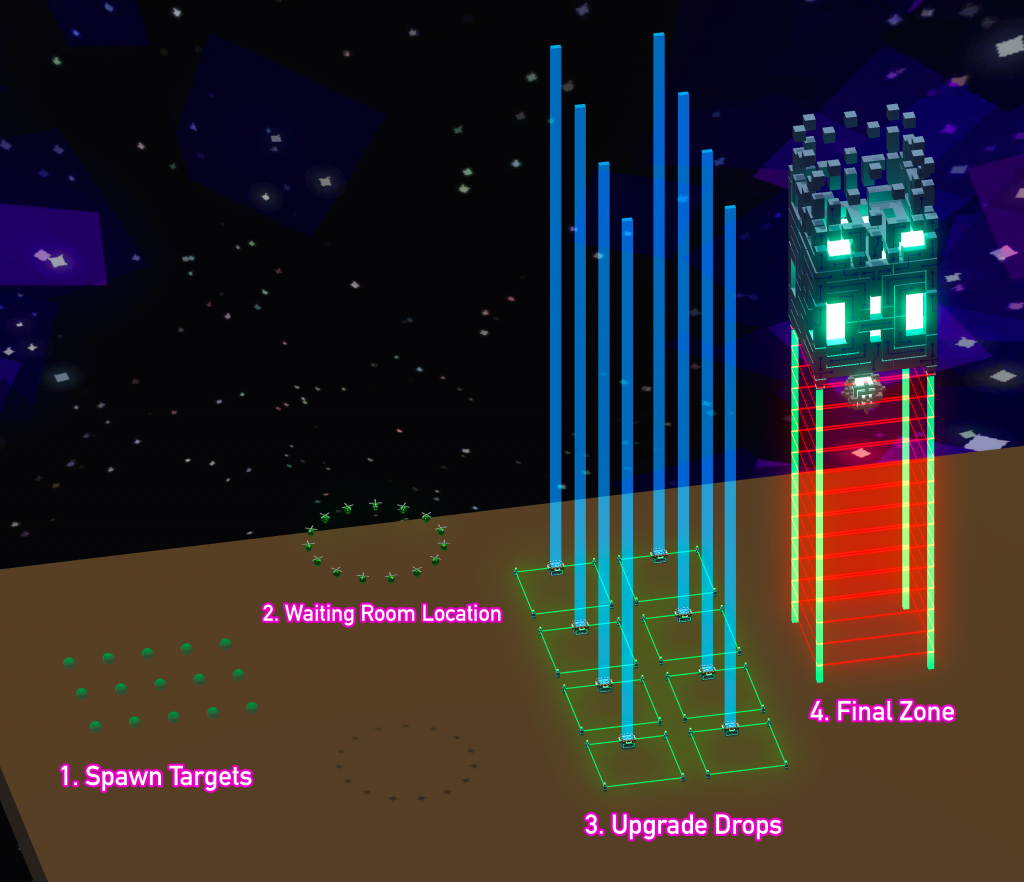 There, now you have a terrible Last Bot Standing level!
You could technically publish this, but instead let’s make it better. 🙂

The edges: Prevent players from leaving your level!

One of the defining choices you must make is how to make sure players don’t fall into empty space forever once they jump of the edge of your level.

Probably the easiest way to make sure nobody leaves is to place some walls around the edges of your level.

Lava is a great way to kill anyone who falls of the edges of the level.

Be sure to place some solid ground under the lava though so the burnt up pieces don’t fall down into it. A height of about 0.25 units for the lava cube is good for making sure you can see the body parts burn up in the lava.

The auto-laser is a very flexible way to deal with players going where they shouldn’t.
To set it up, place the following in your level: 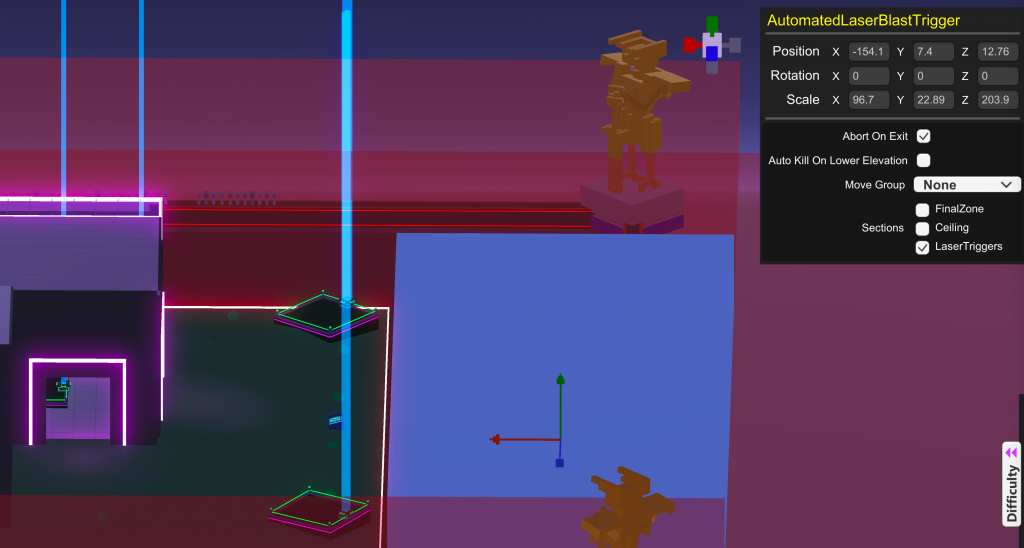 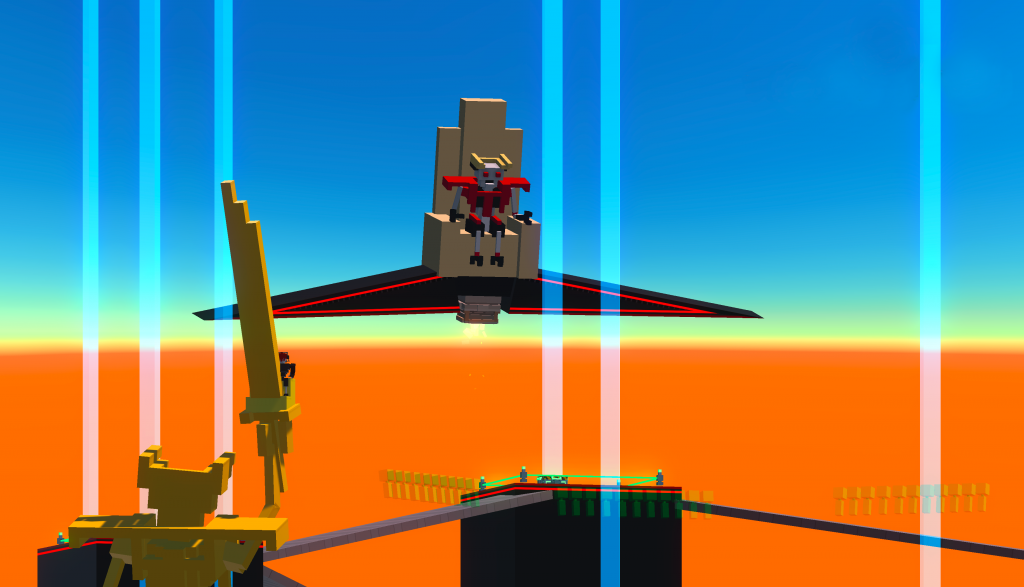 Deciding where to place the emperor, commentators and audience is a wonderful creative challenge! They are great for creating interesting focal points around the level.

Visibility is an important factor to consider when you make a level.
The major considerations are:

A large part of Last Bot Standing is seeking out Upgrade Drops and getting to them before other players. The drops are designed to emit a vertical beacon upon landing, clearly broadcasting where they are in the level.

Typically you’ll want to keep the visibility of upgrade drops very high across the level. They are what draws players together and keeps the tempo of the match high.

Player visibility is more optional, since the upgrade drops will typically draw players together, but not seeing any players is not fun. The interesting risk / reward decisions players face come from seeing the density of opponents around upgrade drops and making choosing whether or not to engage. 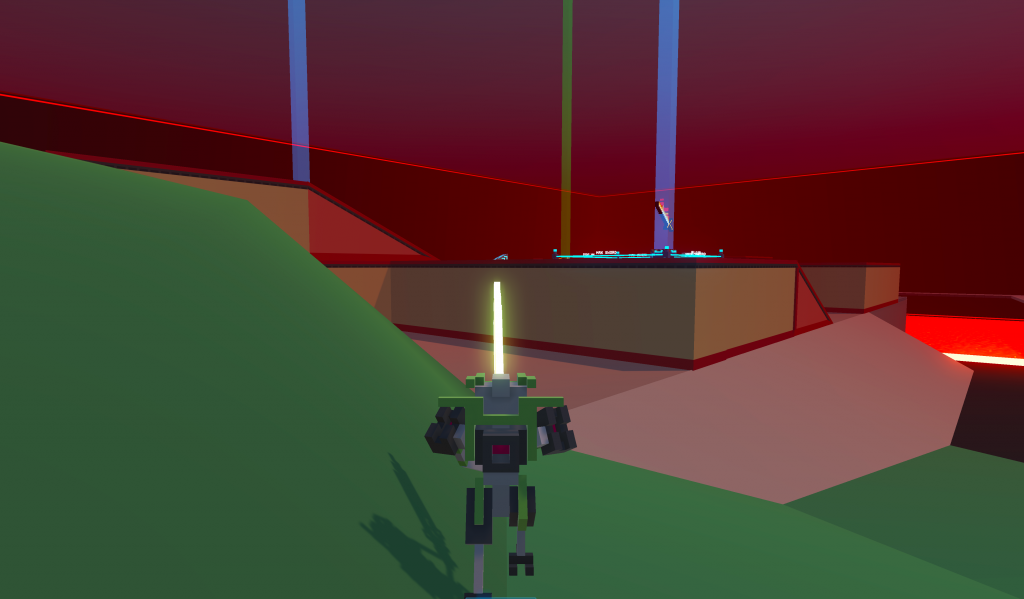 Example: This Maze level above has low player visibility but high upgrade drop visibility. Part of the level’s design is the difficulty of knowing exactly where all your opponents are while seeing the upgrade drops land juuust beyond the wall. This feeling is enhanced by the use of fog, leading to a closed in feeling.

High overall visibility can be achieved by shaping your level like a U. Tall sides that dips in the center.

The final point to consider is how deadly you want the laser upgrade to be on your level.
Scattering some obstacles around can be a good way to give players more options for avoiding the sudden onslaught of laser fire.

How quickly can a player get from one end of the level to another?

Two major things tend to factor into it:

So should you place jump pads everywhere that connects everything? It depends!

It can sometimes be interesting to NOT be able to get somewhere easily, setting up choke points like bridges and narrow passages where the player is exposed to archers.

Beware of air loops: If the target of a jump pad is another jump pad in the opposite direction (or if a jump pad is completely vertical) this can cause players to stay in the air indefinitely leading to much frustration for other players. It’s usually better to place jump pads in a way that cleanly transports them to another area of the map with no immediate way back. 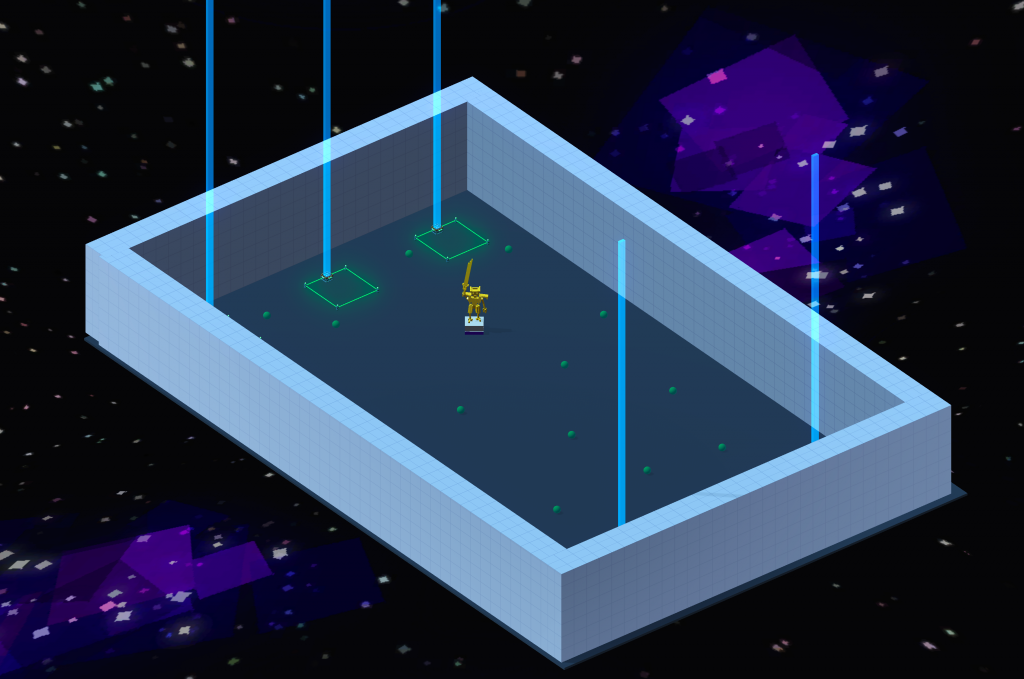 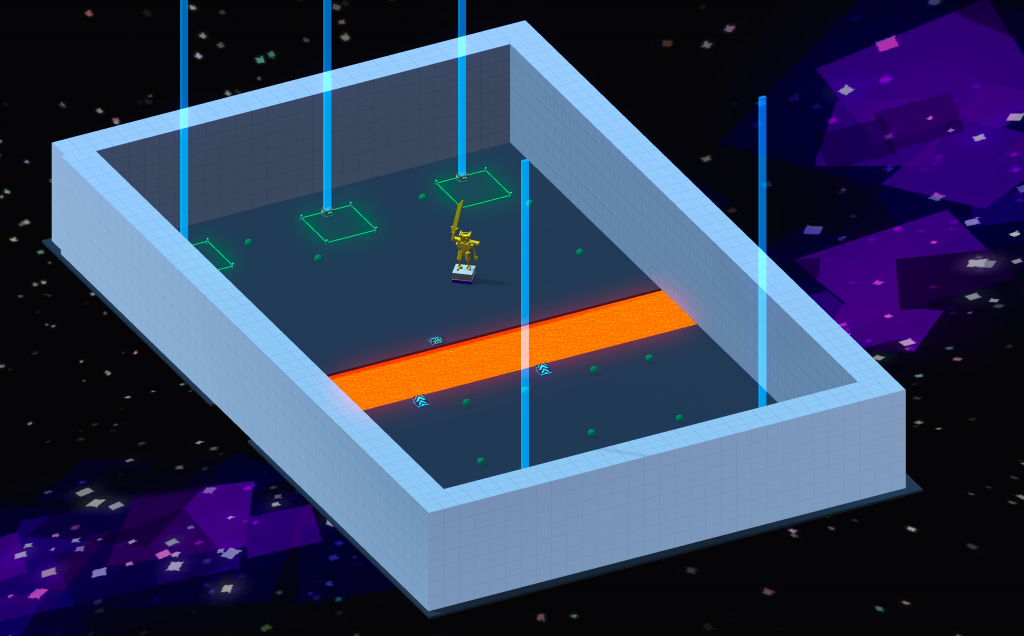 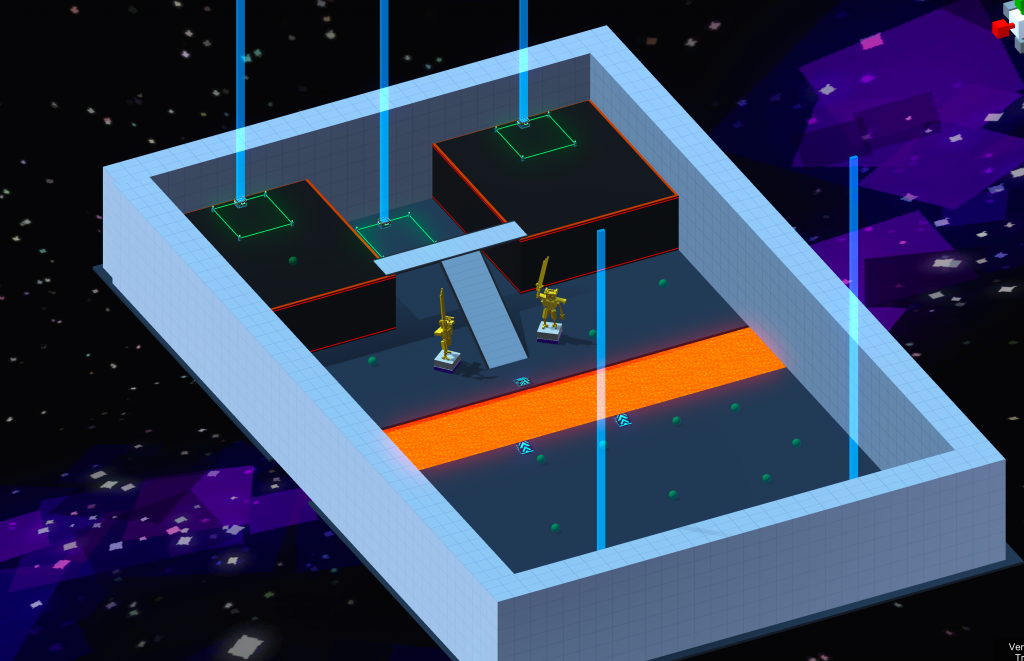 Boring. The areas around the upgrade drops are still really big and plain.

Boring visually.
Boring to fight on.

When players have enough space to run in a straight line in any direction without having to worry about anything it feels bland. It lacks variation, tempo, tactical choice.

Upgrade drops are designed to not quite have enough space to back off fully out of your opponent’s melee range. Don’t negate this wonderful property by always placing them on a boring flat surface that’s wide open.

Typically you don’t want your level to look the same from every angle. Leave visual anchors so the player can create a map in their head about what is where. 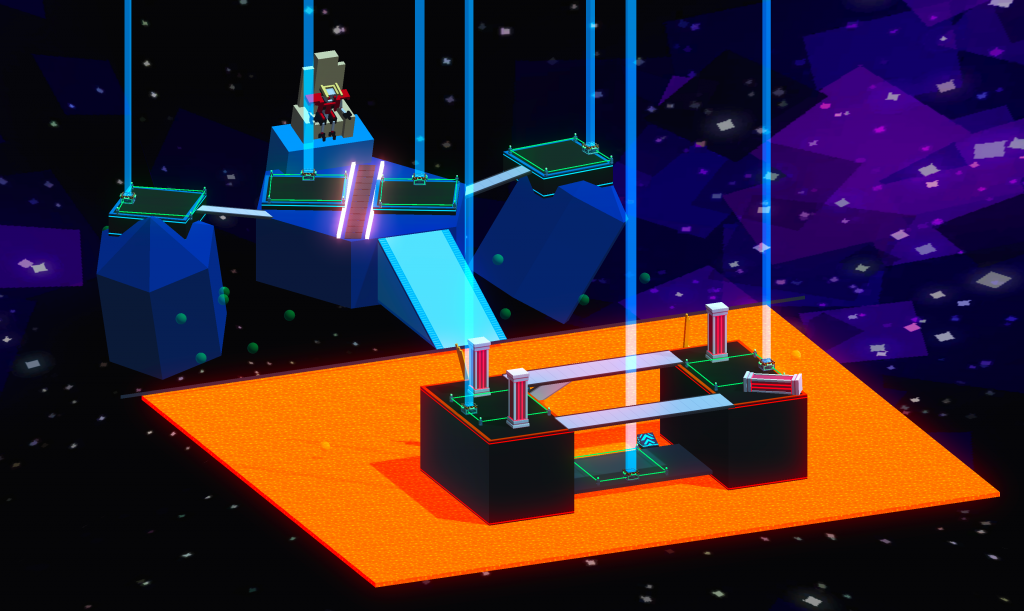 Example above: What if we added a very different looking area to the level from the previous section? It’s a quick draft, but you definitely get more of a sense of place and direction from this non-uniform layout.

Trade-offs to think about:

Design Strategy: Fill in vs. Expand out

The previous two sections had an example of a level slowly growing into place.

The method used in them was the Fill In method. We started with a big frame that captured the rough shape and size we wanted the level to be, then started adding things to it and filling in the space with content.

The challenge with this approach is that we start with a lot of empty space. Every time we add something that’s far away from the other things in the level we create a boring flat area between them demanding we transform it into something that’s both interesting and naturally connects to the surrounding areas.

The alternative is the Expand Out technique. Here is a sped up video of me spending 5 minutes using it:

With Expand Out we start from a small but interesting area. Every time we add something we do so based on what is already present in the level. We let the level speak to us, imagine the player jumping from the edges, backing up to avoid a hammer attack. What’s there? What’s an interesting way to continue the flow?

Things to think about:

There is a natural risk/reward dynamic that emerges from upgrade drops. Do you fight other people for good upgrades, or move on to try to find a different one that nobody is contested? 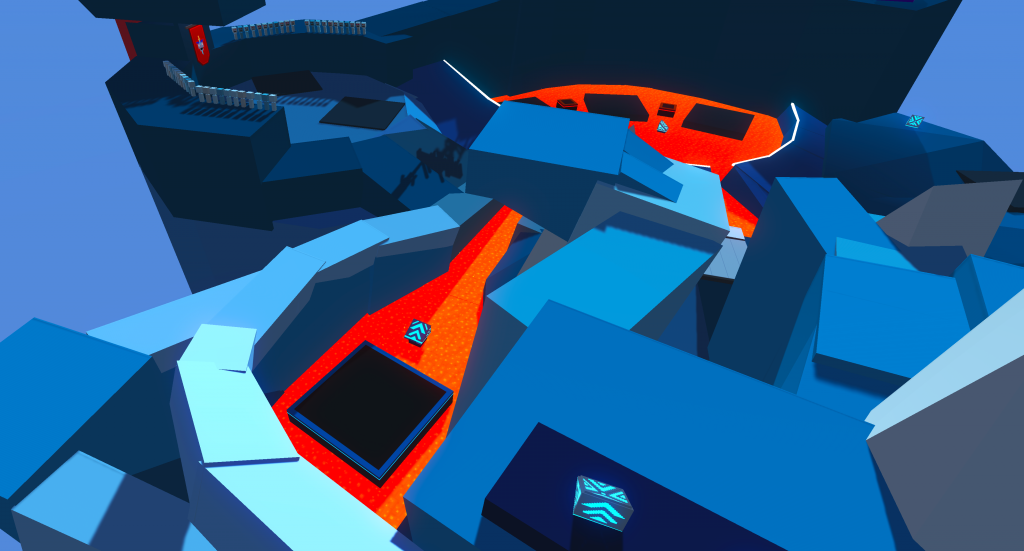 Through strategic level design we can heighten this dynamic:

Make it Unique and Special!

You’re looking at hundreds of workshop levels. Which one do you download?
Probably the ones that stand out from the crowd in a positive way! 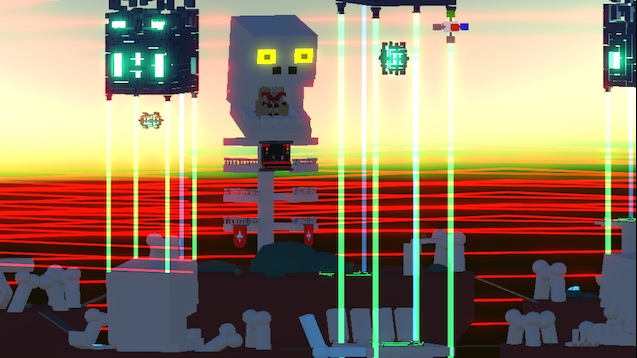 I just looked at the workshop, scrolled past about 20 other levels until I saw Bone Pit, by Dylan_Dies_Alone and had to download it.

Is it better than all those other levels? No idea, but it definitely stands out. 🙂

Test early. Test often! Then Test it again.
The best way to make a great level is to keep improving it until it gets to where you’re trying to go.

Tip: Press Play to automatically start a multiplayer game with your level! In playtest mode you can exit the waiting room from the ESC menu even though you’re the only one in the level!

Play it with others:

Let’s summarize what we learned: